Accepting the motto ‘Sadrakshanaya Khalanigranaya’ the police department is toiling twenty four hours a day for the benefit of the society. Society in turn is happy finding fault with the police. To enlighten such people comes the film ‘Laal Batti’. 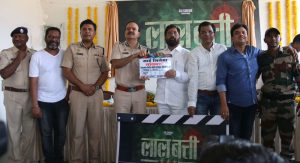 Constantly being in touch with criminals has emotionally hardened the police, this is the perception held by us. But ‘Laal Batti’ searches for the human hidden behind the uniform. Director Girish Mohite said that while unfolding the personal life of the police, the film ‘Laal Batti’ tries to show the humane side of the police force. Hoping that after watching this film, respect for the police increases, Mr. Eknath Shinde wished the team well.

‘Laal Batti’ narrating the humanity of the police force, has the following artistes, Mangesh Desai, Bhargavi Chirmule, Radha Kulkarni, Anil Gavas, Jayendra More, Prashant Mohite, Pradeep Ghule, Shailesh Dhanawade, Tejas S. and Suresh Chaudhary. A Sai Cinema presentation, the movie ‘Laal Batti’ is produced by Santosh Sonavdekar and directed by Girish Mohite. The story and the script is written by Abhay Dhakne and dialogues are by Arvind Jagtap. Cinematography is by Krishna Soren and editing by Nilesh Gavand. The music directors are Avinash-Vishwajeet. The art direction is by Digambar Talekar and the executive producer is Atul Salve.