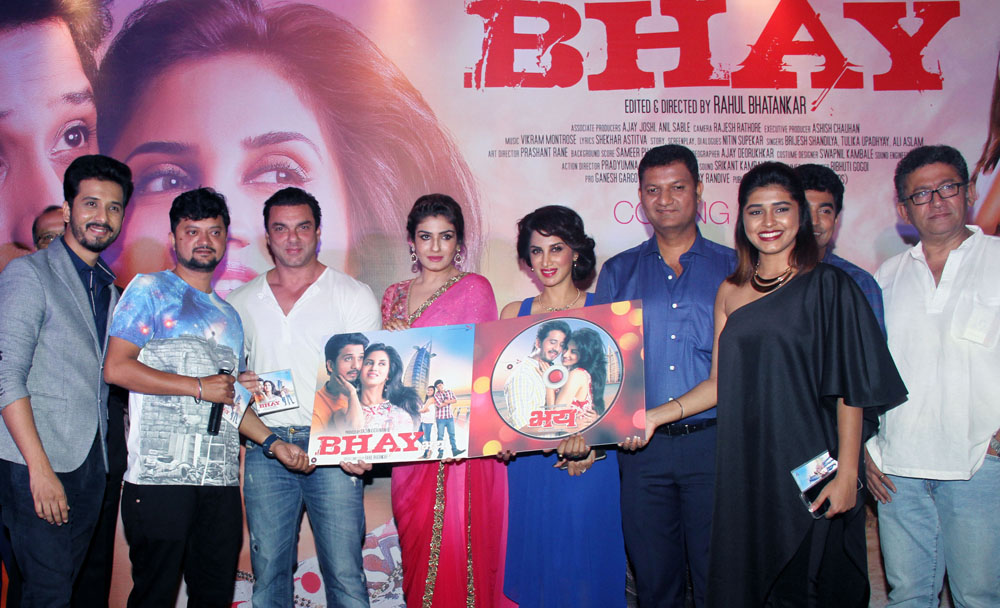 No ‘BHAY’ to work in Marathi movies- Raveena Tandon
Every person has some or the other fear in life but life keeps on moving until that fear takes monstrous shape. The upcoming movie BHAY is about how people live with fear in their mind, face various difficulties.

The music of 5G International presents and Sachin Katarnawre produced, BHAY, was launched recently by Bollywood stars Raveena Tandon and Sohail Khan. On this occasion Raveena Tandon expressed her willingness to work in Marathi movies.
The songs of the movie not only take us on the musical journey, but offers visual treat as well. Audience can see the beautiful visuals of helipads and skyscrapers of Dubai and pristine and famous beaches. This movie has songs of three different genres. The two songs, “Saajanaa” and “Mi aalo” have been sung by Brijesh Shandilya and Tulika Upadhyay. The song “Chal re” has vocals by Ali Aslam. The lyrics by Shekhar Astitva have been set to music by Vikram Montrose. The Music of BHAY is Released  by  Zee Music.
Bhay stars Abhijit Khandkekar, Satish Rajwade, Uday Tikekar, Smita Gondkar, Sanskruti Balgude, Vinit Sharma, Siddharth Bodke, Shekhar Shukla, Dhananjay Mandrekar, Nupur Dudhwadkar. The movie will also be released in three other languages, namely Tamil, Telugu and Arabic.